How the state thinks: Eisenhower, Indochina, and Wikileaks

Eisenhower, speaking about Indochina in the early stages of the Vietnam War in 1965, was willing to expose the major contradictions in US policy in Indochina.

While making ample use of the tropes that would dominate the simplistic discourse about US interests in the region, Eisenhower also let slip some other important truths–namely, the US interest in controlling the region’s key resources, commerce policy, and trade flows.

In a speech at a Governors’ Conference on January 5, 1953, Eisenhower, “noted that “if Indochina goes” out of the US orbit, alas, “how would the free world hold the rich empire of Indonesia?” This specter of failing to control the world’s key resources was plainly intolerable. The obvious conclusion: “somewhere along the line, this must be stopped.”

Eisenhower then justified US funding for the French war effort in Indochina as “the cheapest way that we can” among other things, preserve our “ability to get certain things we need from the riches of the Indonesian territory and from southeast Asia.”

Eisenhower was more candid about the “certain things we need” in a press interview on April 7, 1954 :

Now […] two of the items from this particular area that the world uses are tin and tungsten. They are very important. There are others, of course, the rubber plantations and so on.

The crucial thing, of course, was to control not only US access to these resources, but the entire development of the region’s commerce system and trade flows. The US, as world hegemon following WWII, was in a position to aspire to control access and flow of the vast majority of the worlds resources, either directly or indirectly.

This control system, euphemistically identified by Eisenhower as “the free world,” represented then and still represents today a key component of the logic of US foreign policy objectives. Even when the US does not need the actual resource itself, as in oil and gas, controlling who else has access to it–a major US policy objective–amounts to having the power to enable or disable entire economies and directly influence the destiny of entire continents.

George Kennan’s February 1948 Foreign Policy Planning document is one of the most important in tracking the policy framework of the US in the wake of WWII.

Kennan was clear: the US state planners needed to abandon all pretense to any moral reasoning in its approach to policy, and to adopt a precisely amoral, self-interested, ruthless approach.

According to Kennan, “It is urgently necessary that we recognize our own limitations as a moral and ideological force among the Asiatic peoples;” “we have about 50% of the world’s wealth but only 6.3% of its population;” hence “we cannot fail to be the object of envy and resentment. Our real task in the coming period is to devise a pattern of relationships which will permit us to maintain this position of disparity… To do so, we will have to dispense with all sentimentality and day-dreaming.”

“In the Far East, our position is not bad; and we still have a reasonably firm grip on most of what is strategically essential to us. But our present controls are temporary ones which cannot long endure, and we have not yet worked out realistic plans for replacing them with a permanent structure.”

Moreover, Kennan was aware that the US public, misled by state propaganda and self-delusion, had come to view the US state as a moral force in the world, a situation which needed to be gently rectified so that ruthless actions could again be publicly embraced.

“Meanwhile our own public has been grievously misled by the sentimentalists on the significance of the area to ourselves: and we are only beginning with the long and contentious process of re-education which will be necessary before a realistic Far Eastern policy can receive the popular understanding it deserves. In all areas of the world, we still find ourselves the victims of many of the romantic and universalistic concepts with which we emerged from the recent war.”

Kennan explained the document, which was top secret at the time, in a preface:

“When Mr. Acheson [then Undersecretary of State] first spoke to me about the Planning Staff, he said that he thought its most important function would be to try to trace the lines of development of our foreign policy as they emerged from our actions in the past, and to project them into the future, so that we could see where we were going. […] I have now made an effort toward a general view of the main problems of our foreign policy, and I enclose it as a Staff paper…. [I]t is a first step toward the unified concept of foreign policy….”

The US State Policy: the world’s resources are under our control

Further internal state documents from the post-WWII period made clear what the US state should consider essential to its functioning. The list is long, and I post it in full below, but the crucial thing is that it lists elements from all of the worlds resources as “strategically important.” In other words, given the opportunity, the US ambition is to control everything valuable, everywhere. When it loses control of one piece of this system, it will consider this event a “falling domino,” label it “Communist” or “evil” and begin to attack it to reassert control within the framework of the “free world.”

Here is the list in full (the document can be found here): 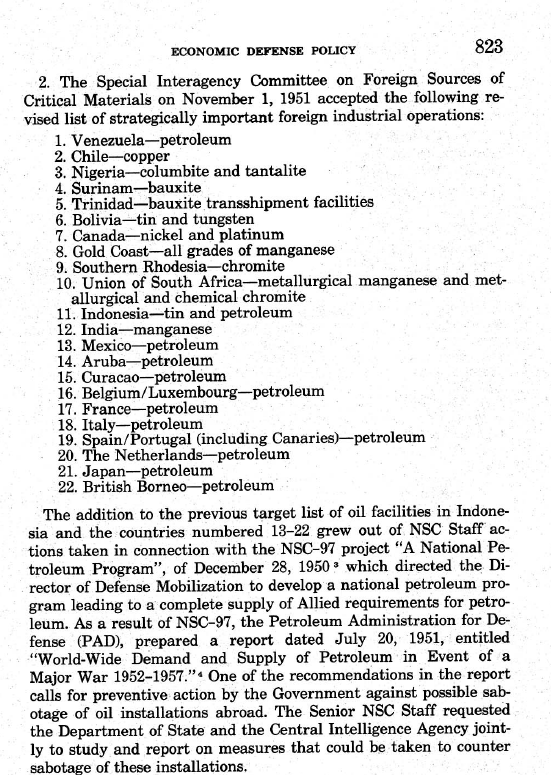 The document goes on in detail to describe how these elements of the world’s resources are important to US objectives, and how the US will go about assuring control over them.

Zooming in on a single case is instructive. Any will do, so here is the part on Southern Rhodesia, a state with a high moral standard that fits well with US policies. In this case, the State Department is concerned that the apartheid Southern Rhodesian state is not effective at keeping the local resources away from local, democratic control, and discusses ways that this can be remedied:

In addition to being extremely concerned to control the flow of resources for US and US-ally uses, the US State Planners were clear that the state should do everything it could to keep critical resources from being accessed by the noncompliant states, those who were not part of the “free world” system and whose growth and economic well-being should therefore be deliberately sabotaged and stunted (pp. 957, 958): 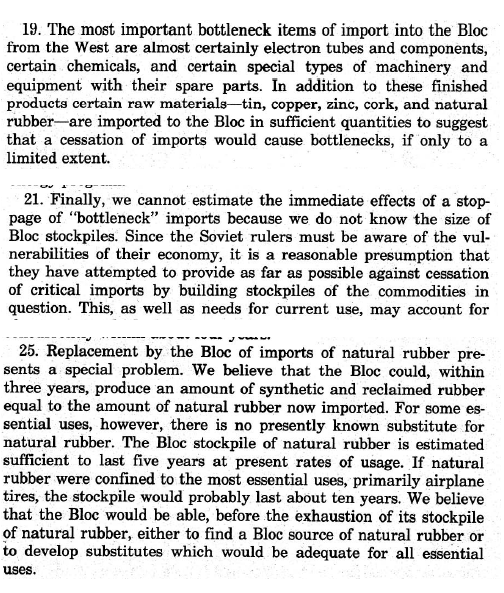 So the control over resources and trade flows is, according to the State, not only so that our people profit from it, but also so that unwelcome states (and their inhabitants) do not. It should be noted that in point #25 above, the planners take note that access to rubber resources represented a potential difficulty for the Soviet Union. Crucially, rubber plantations are one of the primary resources of Indochina, where the US ended up spending a fortune over the course of three decades to control the flow of resources there.

Fast forward to the present: the imperial logic of state power

So that’s what the US state was thinking in the postWWII era, as it was wading into military and covert ventures in East Asia, Greece, West Africa, Central America and elsewhere to protect and control its many strategic assets, something it has every right to do because it is being done in the name of freedom.

Fast-forward now to the present. Among the Wikileaks release of US cables, there is a 2009 list of “Critical Infrastructure and Key Resources” in other people’s countries. It is a list of things the US thinks it has a right to control in its favor in order to preserve “the free world” of 2009.

The document stipulates that “the National Infrastructure Protection Plan requires compilation and annual update of a comprehensive inventory of Critical Infrastructure/Key Resources that are located outside U.S. borders and whose loss could critically impact the public health, economic security, and/or national and homeland security of the United States.” In other words, if we decide that your production of chromite is important for us, then we assert the right to control its production. And to do this, we have a vast, sprawling, and terrifying military and surveillance infrastructure to operate with, including over one thousand bases across the globe, as well as drones, satellites, espionage submarines, acquatic spy drones, and extensive spy agency activity in all major countries.

What is astonishing is the pretentiousness of the list. Would the US be alright with another country, such as Nicaragua or Gabon or Thailand asserting its right to protect access to and control over resources across that globe that appear to help its interests?

The list of what the US State considers crucial to its operations and interests is sprawling, and far too long to detail (but you can read it for yourself here).

Here are some examples:

Congo (Kinshasa): Cobalt (Mine and Plant)

Peru: Tin Mine and Plant

Qatar: Ras Laffan Industrial Center: By 2012 Qatar will be the largest source of imported LNG to U.S.

I’ll conclude with some basic points about how we think about states. It should be trivial by now that it doesn’t matter what politicians say: we can always expect them to always utter moralistic bombast to defend state policy, no matter what that policy is. But state policy itself, it should be clear, has zero interest in actual moral principles, except opportunistically as propaganda points.

State policy is formed around ruthless competition over access to resources and control over trade flows, as the above examples show. This forms the core of state policy, and then rhetorical bombast then gets put on top, like whipped cream over a machine engine.

This should signal to us that we want to bring state power under real democratic control. Presently, the mechanisms for controlling state policy are structured in a manner to superficially approximate democratic responsiveness. While the level of actual democratic content in the formation of US state mechanisms and policy is extremely limited, and has a long way still to go, it is certainly an improvement over autocracy, police state authoritarianism, and sham democracies like those of some  African states such as Algeria or Zimbabwe.

The essential point here, however, is that we should never expect the state to move itself in a more moral direction or to provide better protections or more democratic mechanisms on its own. It will never do this, because it has every incentive not to–it is structured to respond to the incentives of economic power, not democratic power or moral principle. So if we want anything better out of it, we have to organize, rally, create leverage, and force it to concede something, again and again and again. This is the only way that anything throughout history has ever been obtained from a state. If England ever left India, it was not on its own accord, it was because of enormous organizing and the efforts and bravery of millions of upset Indians who demanded better rights (as well as an unwillingness of a British domestic public to forever tolerate genocidal repression tactics). When they had created enough leverage, and occupying India was no longer a good investment, England left. Likewise, under FDR in the US, when the business coalitions controlling government policy determined that it was no longer a good investment to crush labor protests and suppress massive public activism, then it offered up concessions in the form of improved labor conditions and basic entitlement programs to guarantee basic health needs for the population.

States only make moral moves when pressed so hard to do them, that it is a bad investment not to, in both the short and long term. What is clear is that unless the activist public can create these conditions by large-scale organizing, consistent activism, and sustained effort over years, it should not expect a single concession from the state.